Short Description: An interactive installation that attempts to mimic flying. This was created with a partner by projection mapping footage of landscapes onto a wood and cloth cubicle we built, using MadMapper, Arduino and Processing.

PICTURE AND VIDEO DOCUMENTATION
(There’s a lot; scroll down for written documentation) 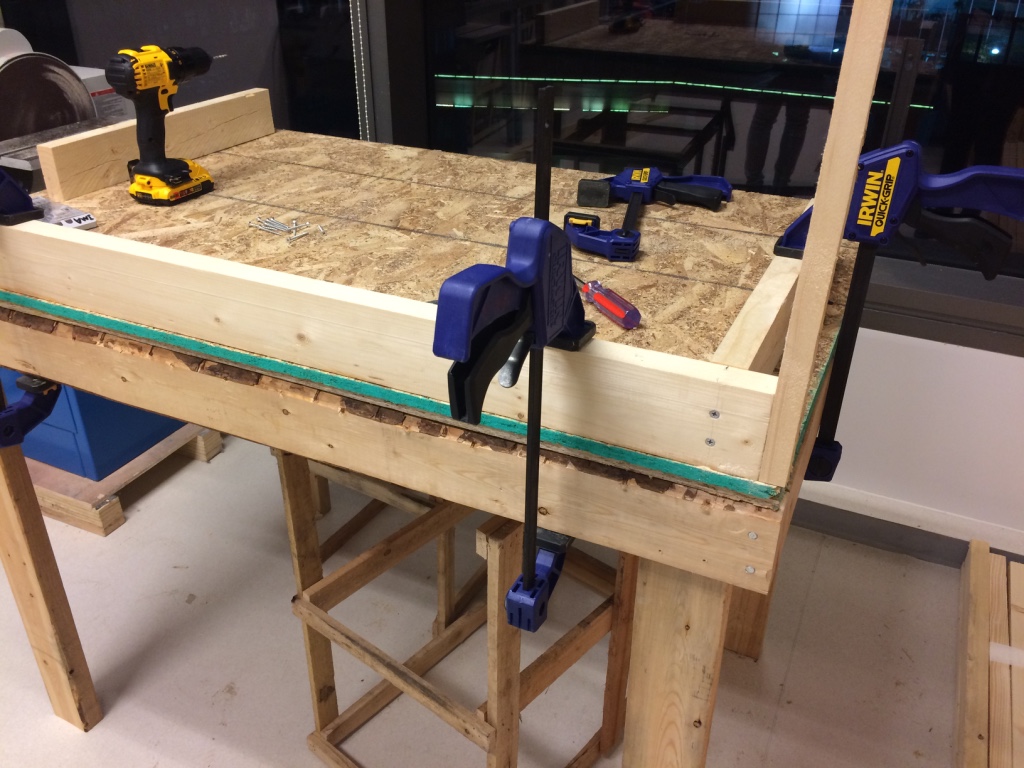 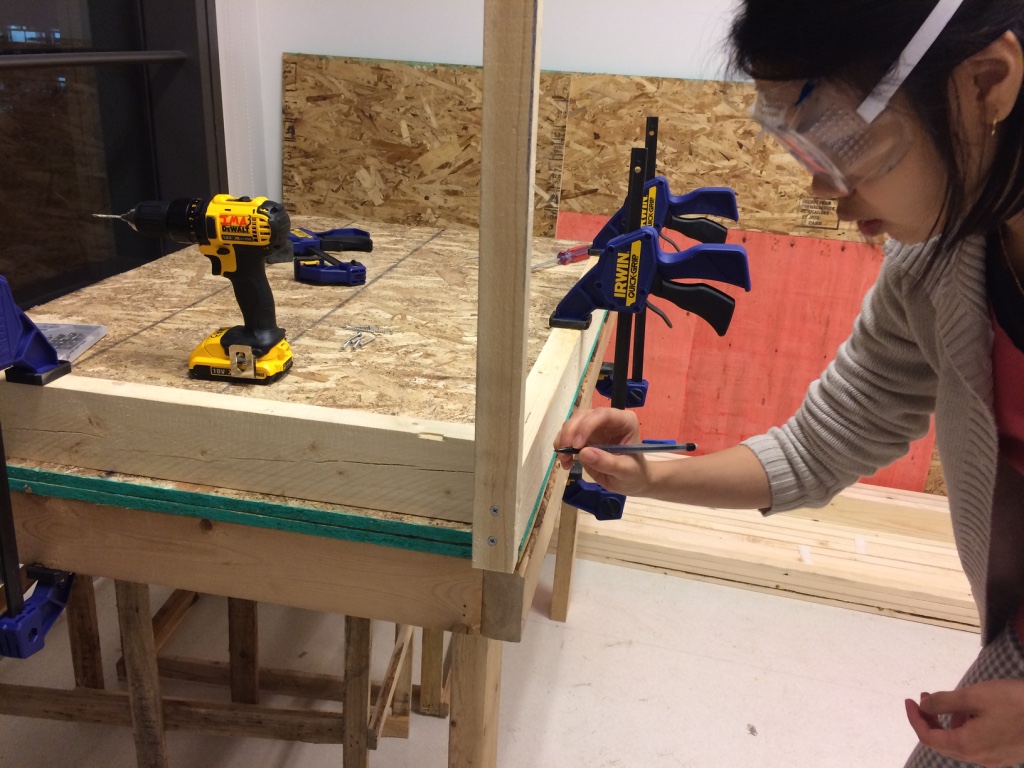 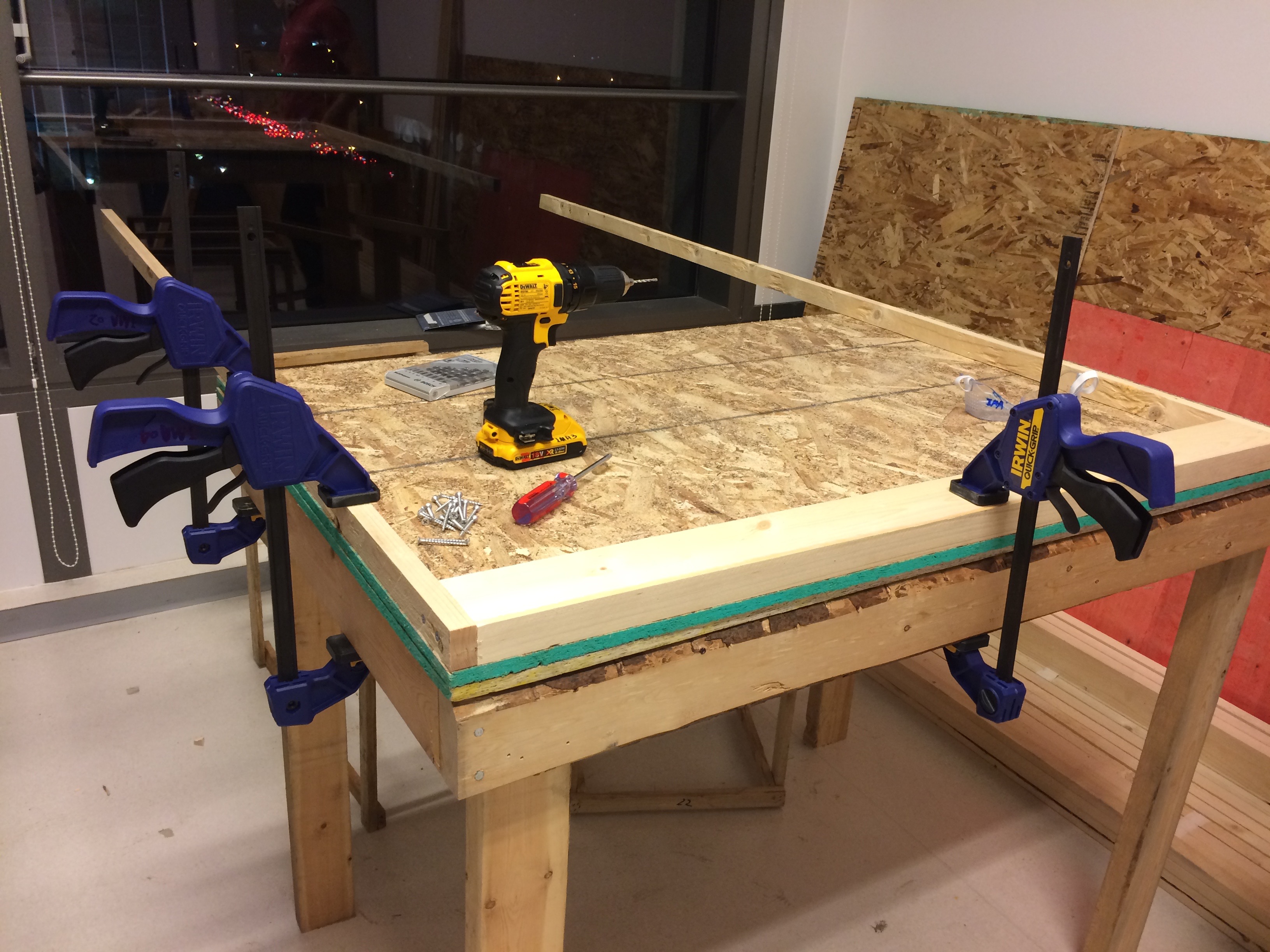 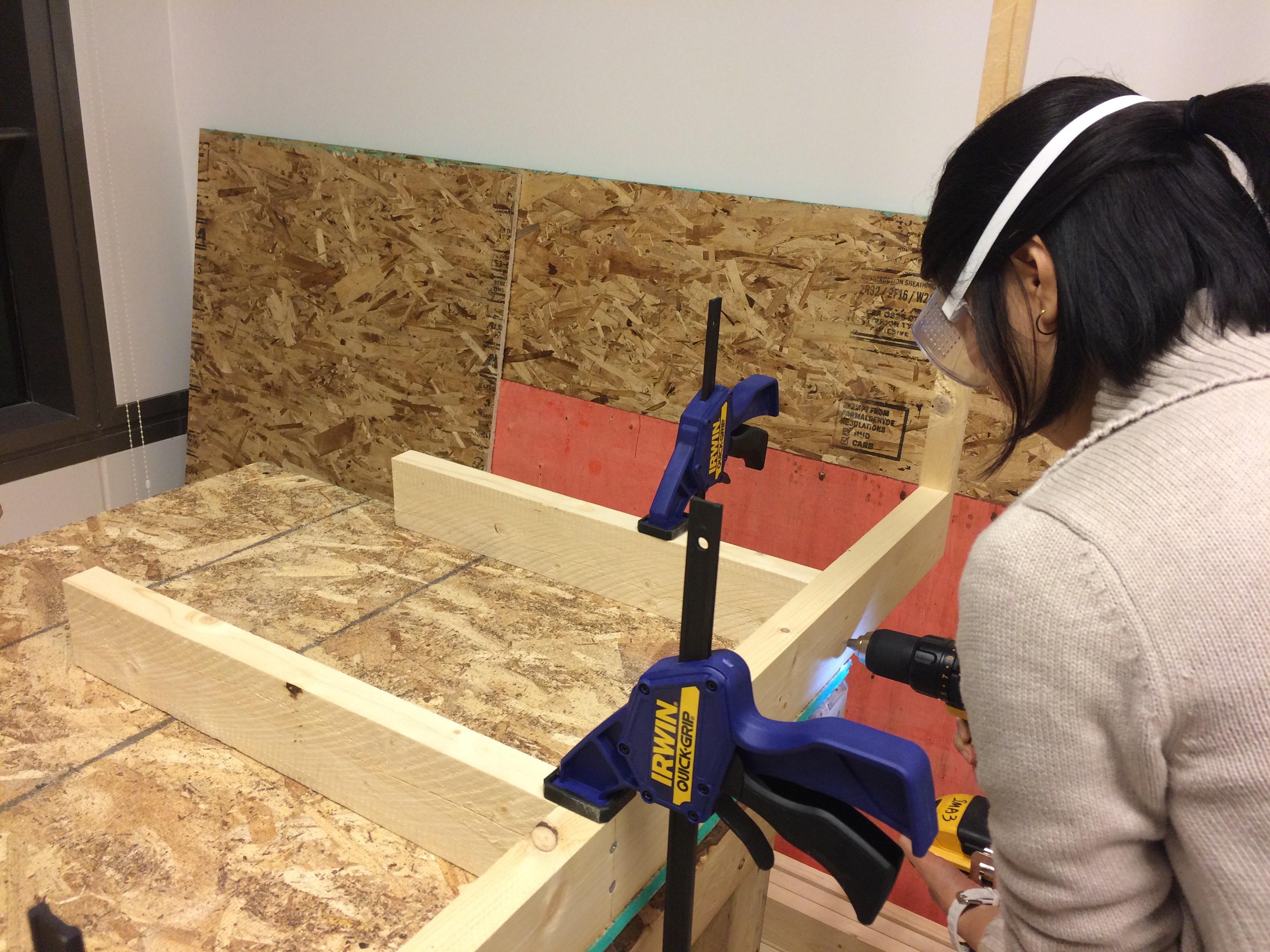 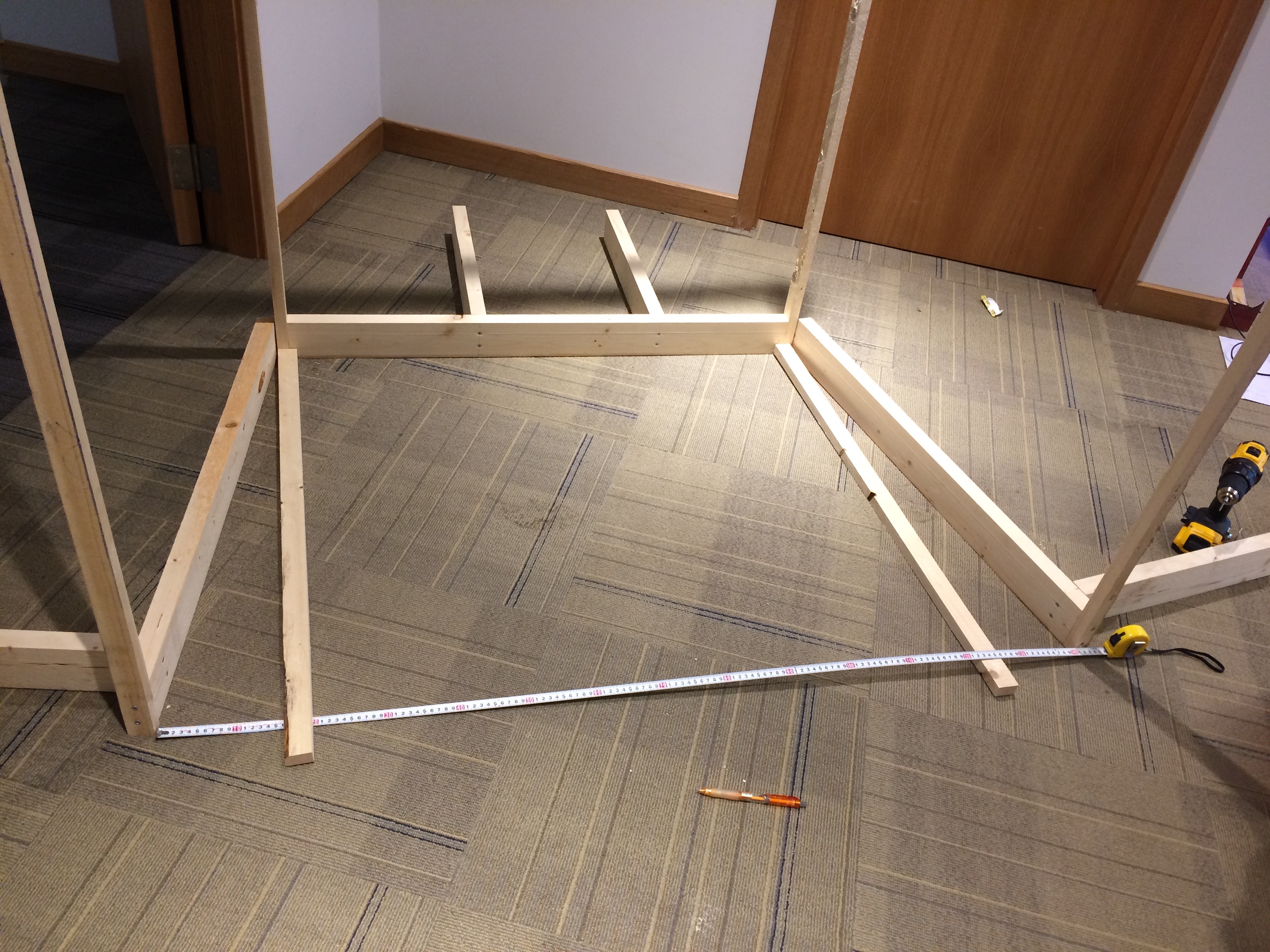 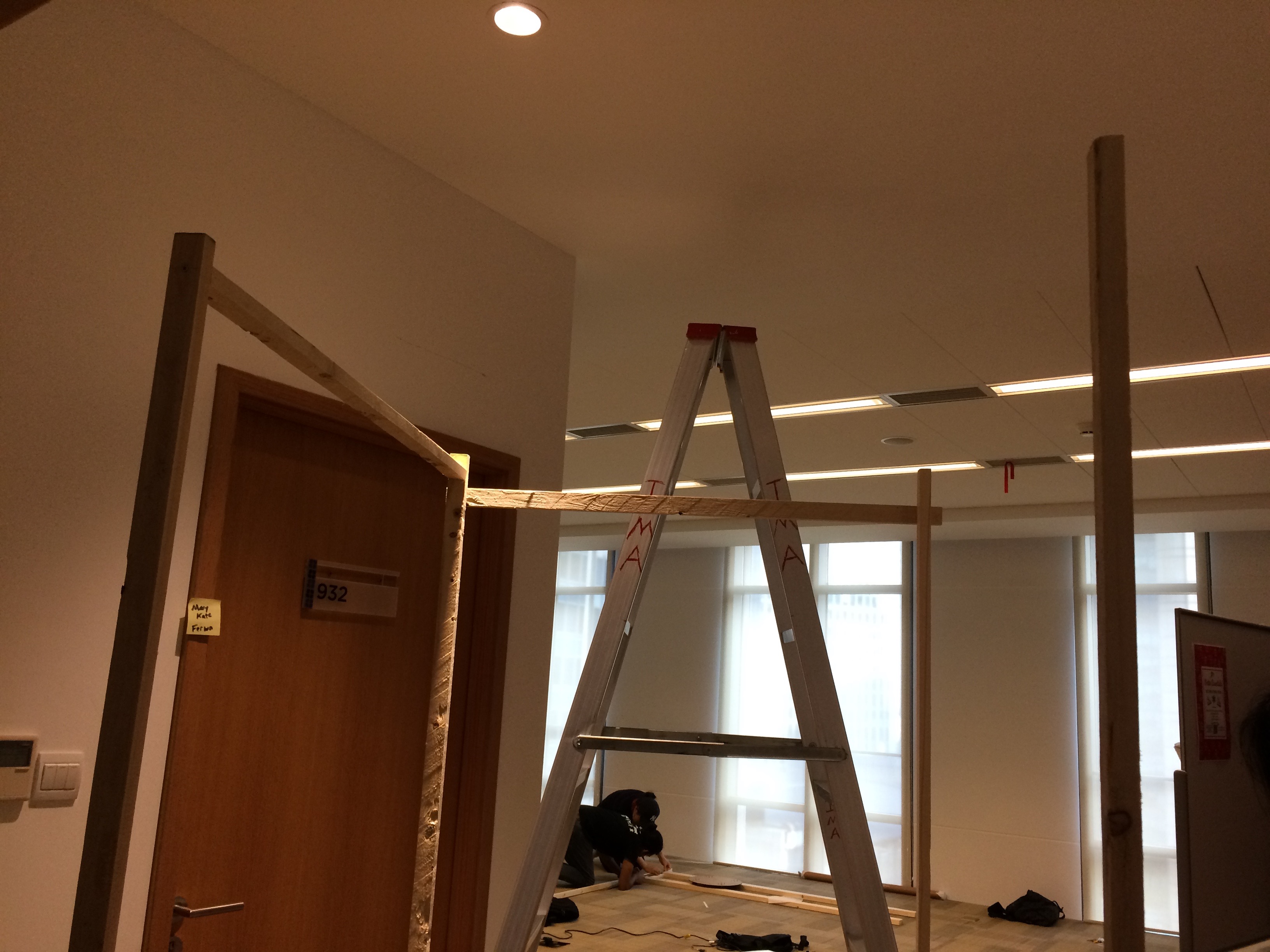 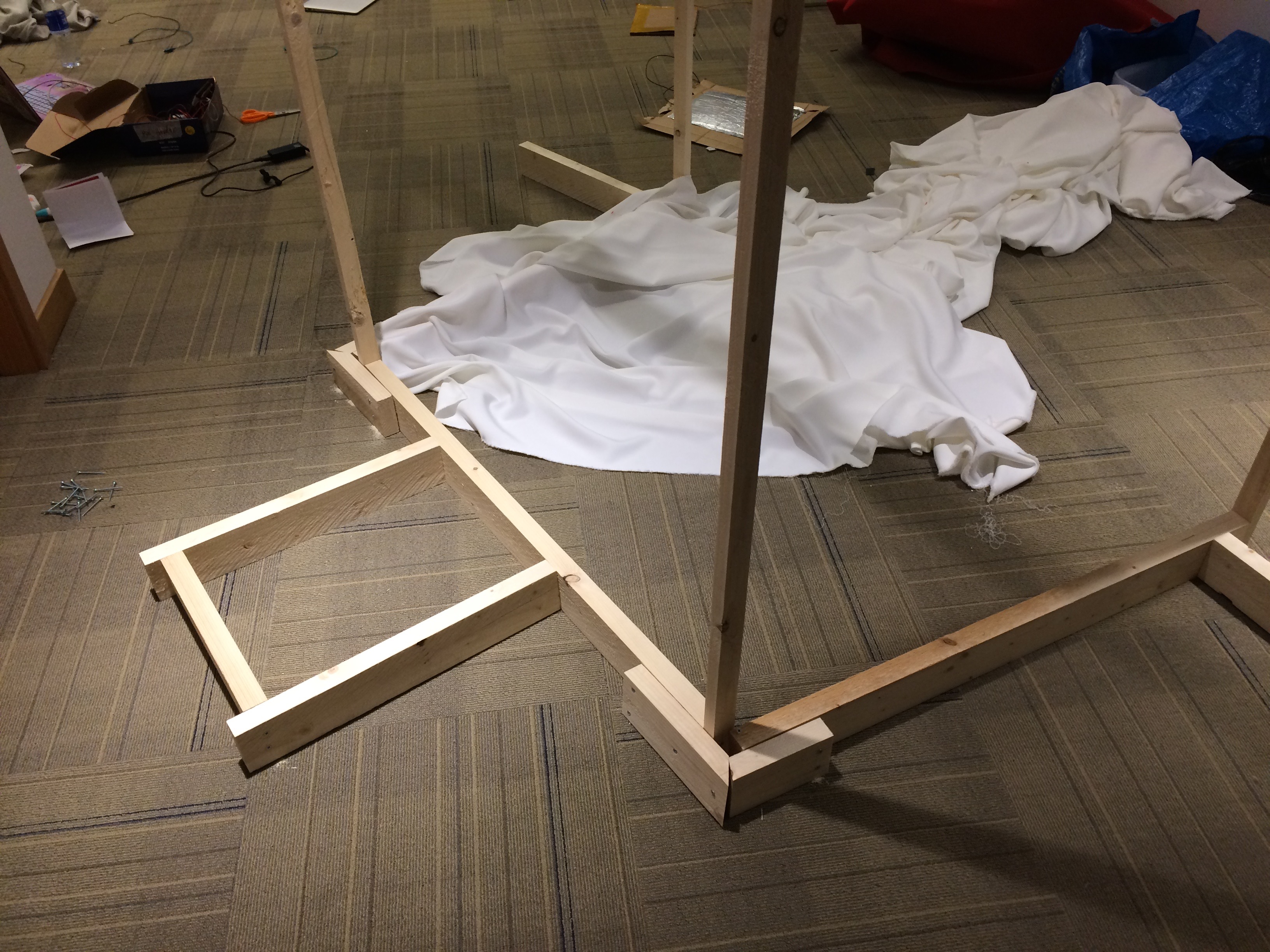 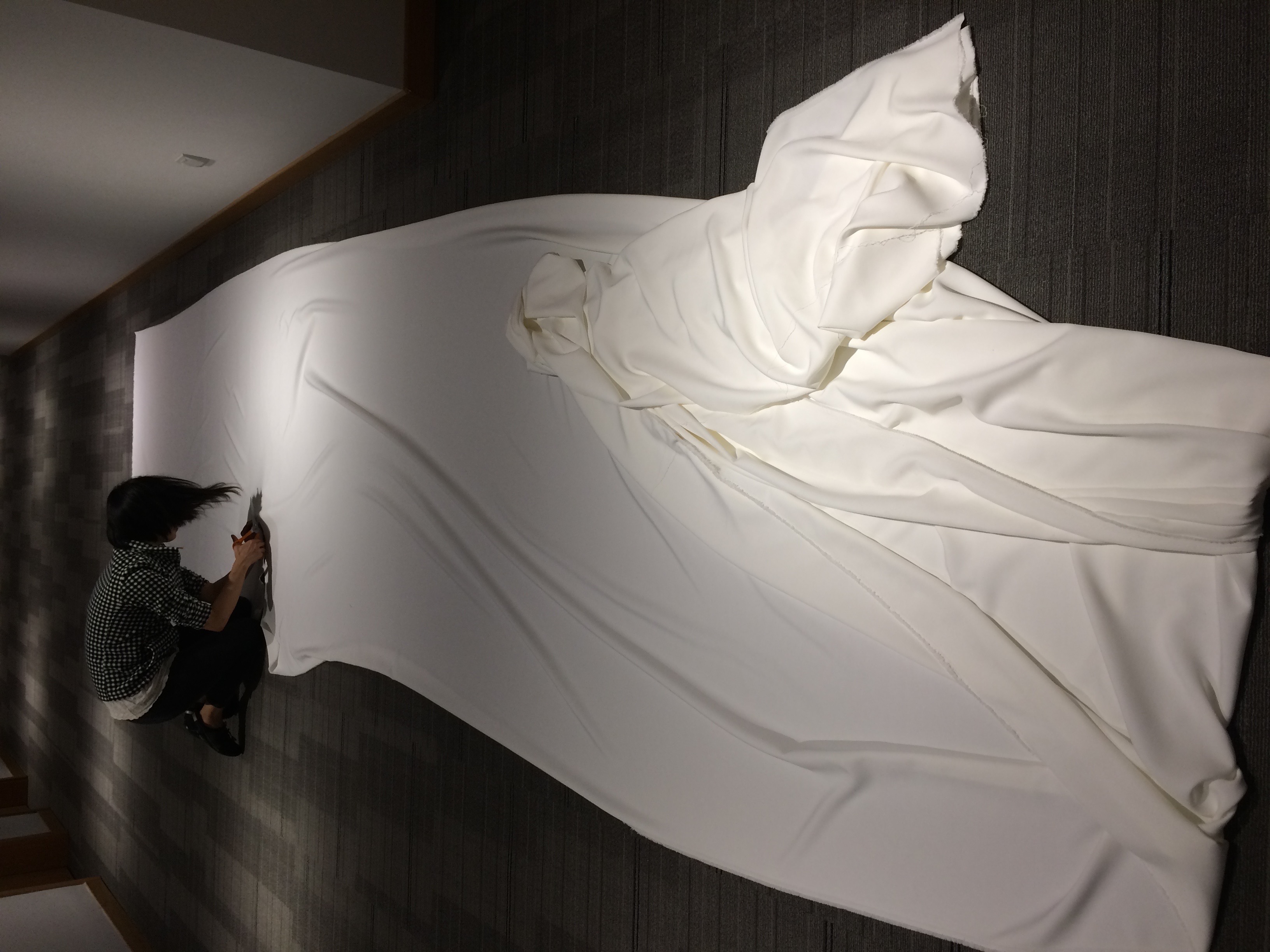 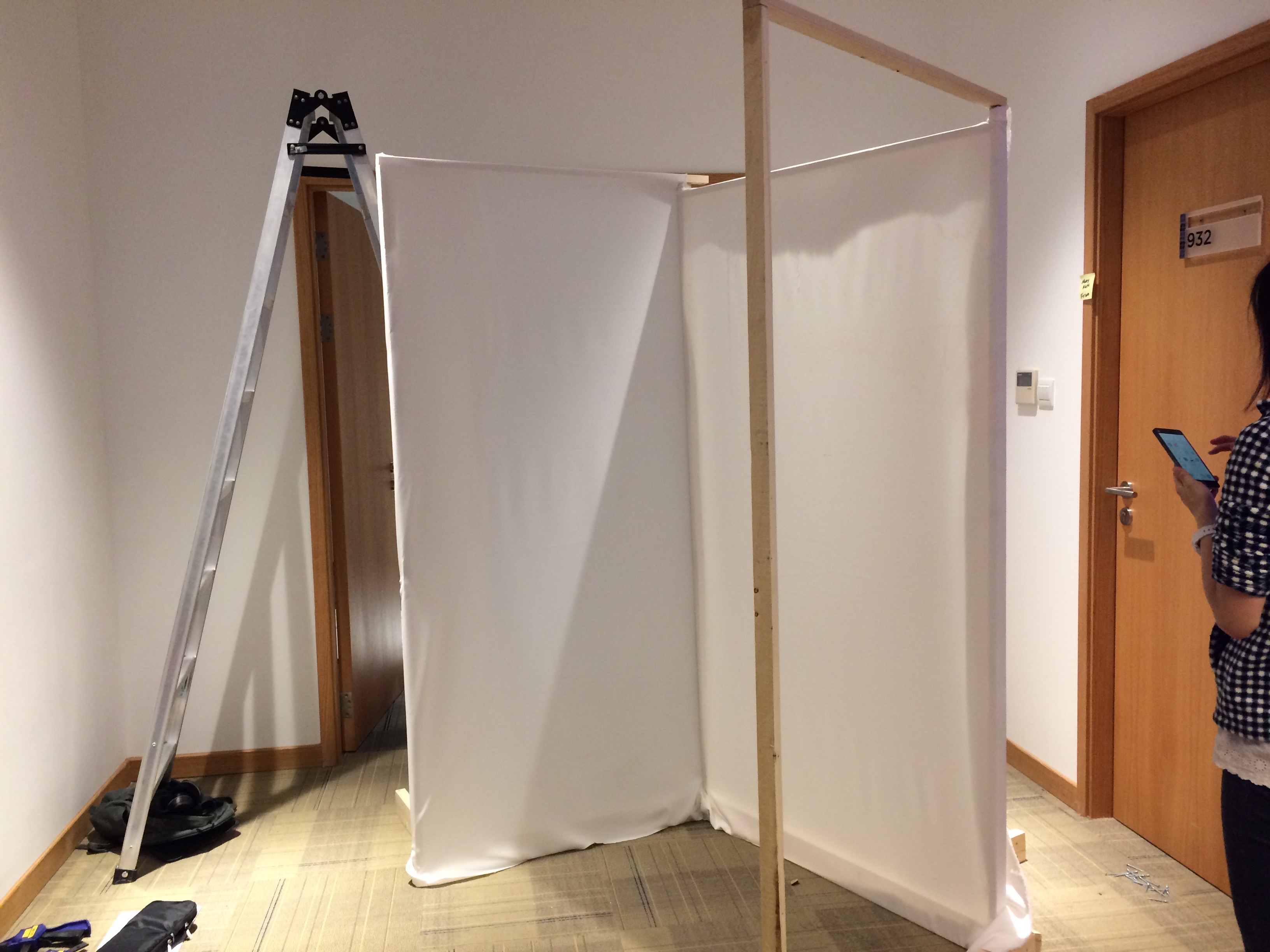 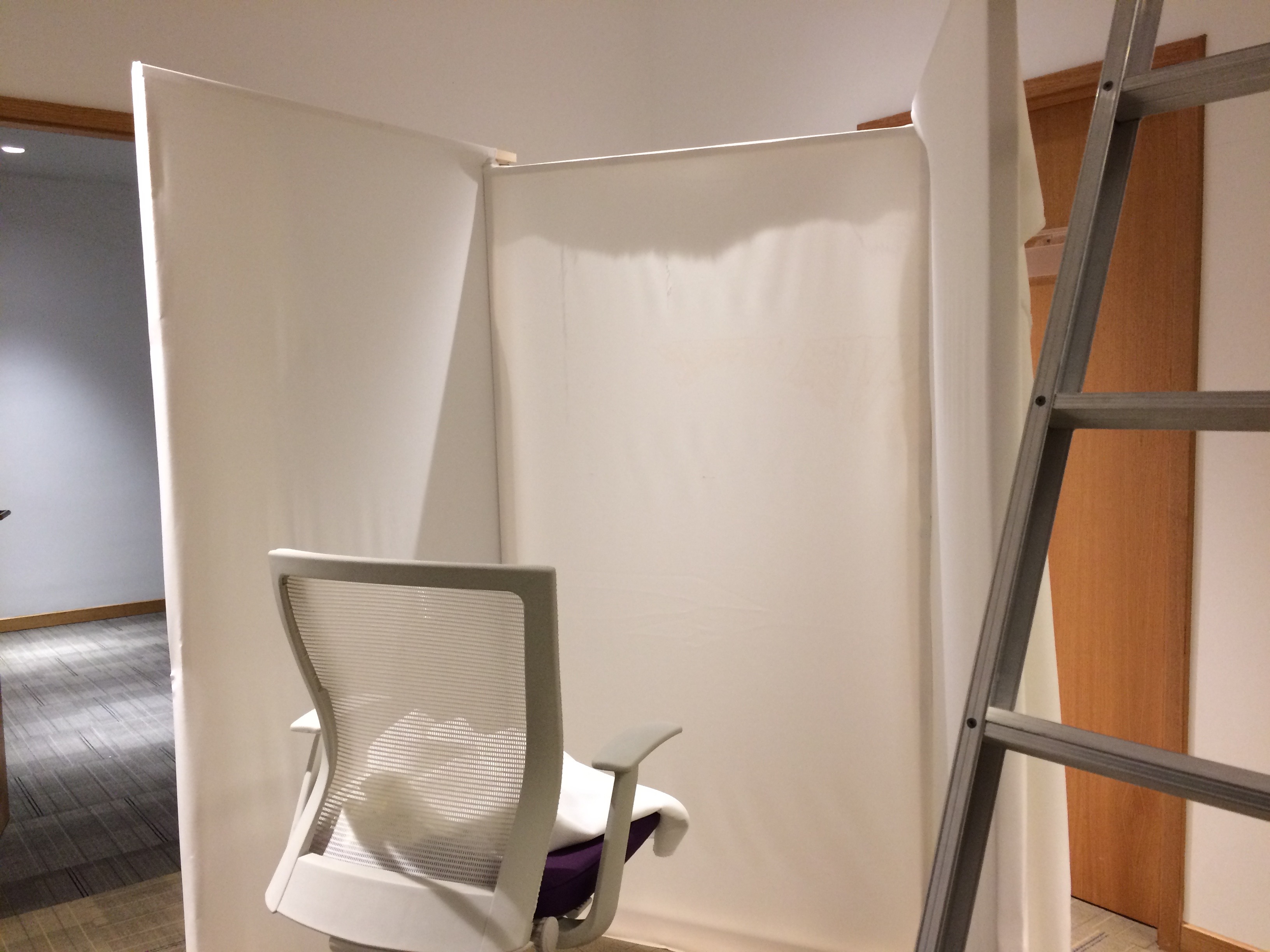 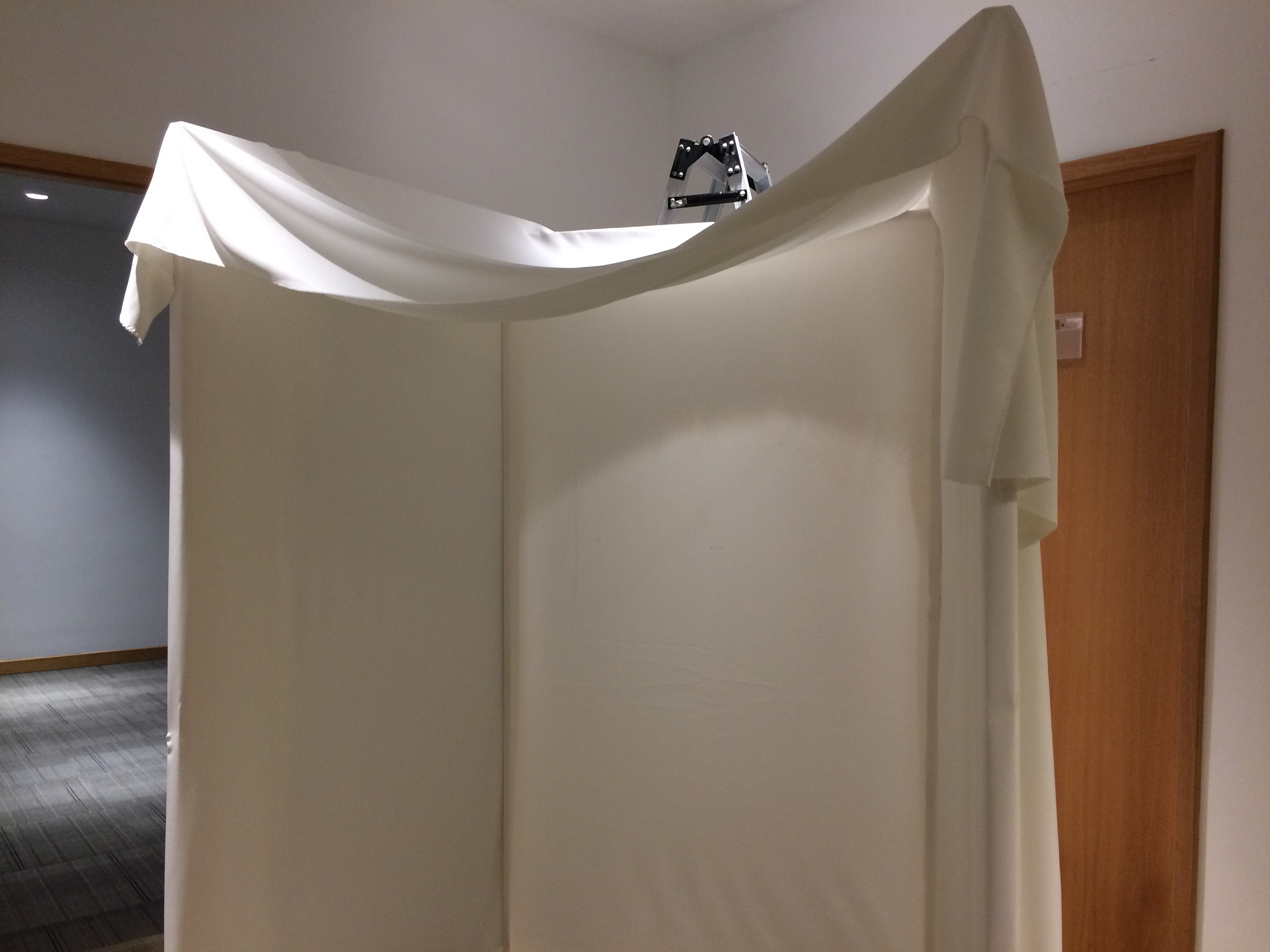 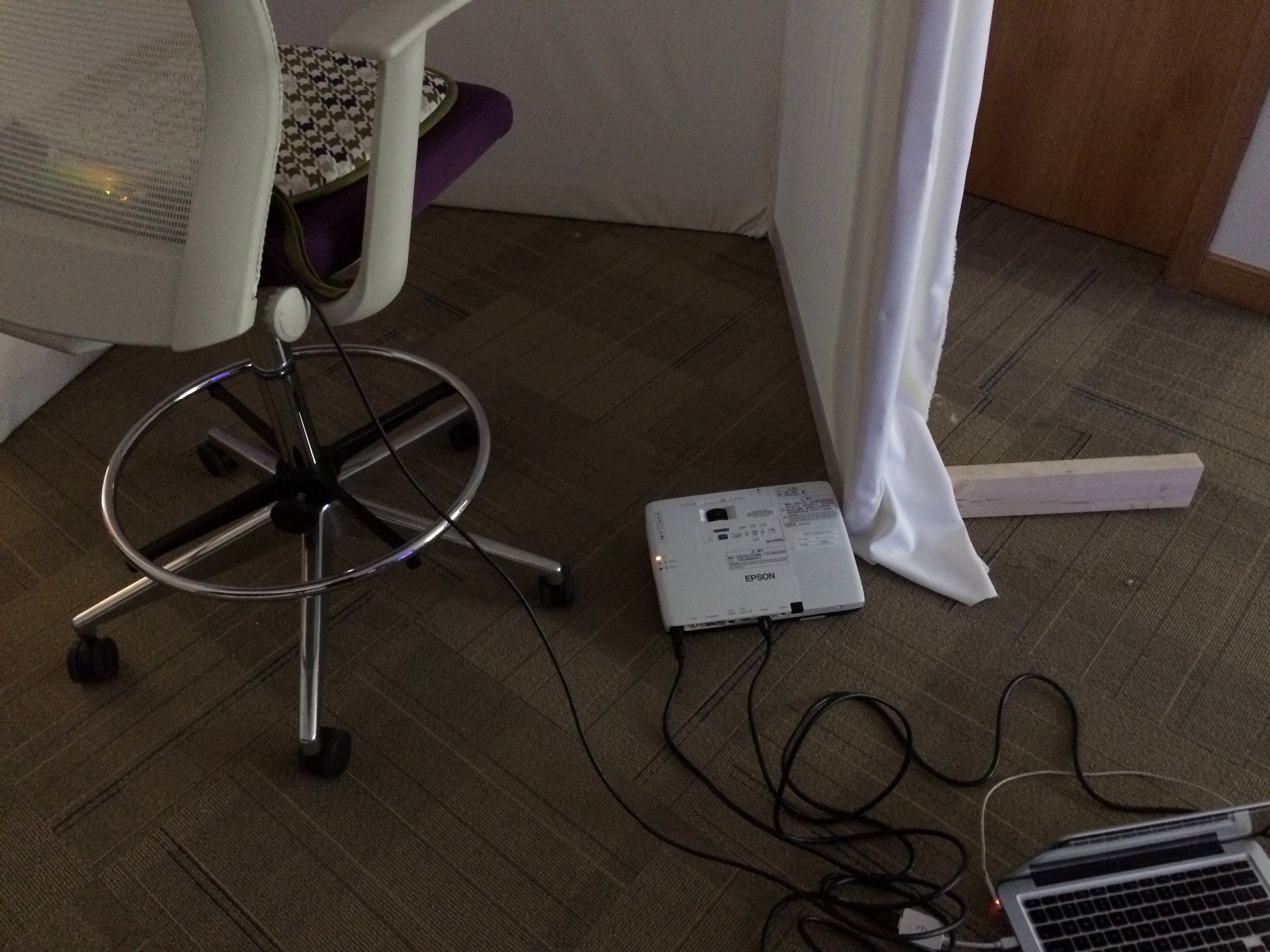 My partner, Mary Kate, and I proposed a project that centers around creating the effect of flying through projection mapping. We constructed a cubicle wherein scenery elevating from the ground to the sky will be projection mapped onto its walls, triggered by a user sitting on a chair with a light sensor on it, essentially creating an immersive experience. Each time a user sits on the chair, a different video is played. We veered toward the idea of experimenting with projection mapping as neither of us had much experience with it and we also wanted to gain experience using a woodshop. This eventually culminated in our idea for The Flying Chair Experience, also partially inspired by the film Up, although we wished to build a chair as opposed to flying an entire house.

We built our prototype after planning out steps for the various aspects of the project and determining a minimum viable product; our priorities were to search for and compile suitable videos for mapping, construct the cubicle, and obtain a chair to add the light sensor as time constraints would not allow us to construct a chair from scratch.

We obtained four videos of first person view drone footage of flying over appealing landscapes, realizing the difficulties of finding material that was appropriate for what we wanted the user to experience. We then compiled a Processing sketch for the videos to play, a different one each time a user would sit on the chair. We adjusted the code, with further difficulties, so that when the light sensor’s value would be 0, which means that there would be no light – indicating a user had sat on the chair with the sensor on it, a video would begin playing. Meanwhile, we also edited the videos to remove any unwanted material, then included them in the sketch.

We drew out a basic sketch for what the cubicle should look like and its possible dimensions. Originally we wished to build a semicircular cubicle to provide a more seamless experience, however owing to our time constraints and the materials we were using, we determined it would be difficult to create a cubicle so round; we were planning to use three vertically standing wooden beams with flat supports to create the surface, but this would result in too much of a triangular form. Instead, we used four beams two meters tall, creating a trapezoidal structure that was more appropriate. The beams were spaced out so that the dimensions of the trapezoid were 1 meter by 0.87 meters by 1.4 meters by 0.87 meters. Pieces for the base, top, and supports were also cut out, and all of the parts were built by drilling pilot holes in them and using screws to join them together.

After assembling the cubicle, we used several meters of a relatively thick white cloth, suitable for being mapped upon, to cover the frame. We attached the material to each wall using a hammer and small nails, wrapping the cloth around the beams and nailing it to the back of the beams/cubicle so as to prevent the nails from being visible to the user. We made sure to check that the material was fairly taught over the frame.

Finally, we placed a chair in the cubicle and attempted to position the projector so that it would project onto the whole of the walls. This proved a challenge, however, as our space was limited; thus the projector would only cover a relatively small portion of the walls. We connected the light sensor to an Arduino, which was connected to the laptop through which we were attempting to link the Processing sketch to MadMapper using Syphon, so as to map out the cubicle. The light sensor was placed under a seat mat on the chair. Due to the limitations of Syphon, we were unable to use MadMapper, however, we were still able to successfully project the sketch onto the cubicle walls. When tested by users, although the user needed to ensure they were sitting far back enough to cover the light sensor, the installation worked appropriately.

Ideally, as brought up during our ideation process, we would like to build a chair that the participant may sit on, with many colorful balloons tied to it, inspired by the film, Up. Otherwise, to add to the idea that the chair is meant for a flying experience, it might be interesting to add wings to it. If possible, we would also like to incorporate fans that turn on and speed up gradually once a user triggers the videos to begin playing, further adding to the experience of rising in the sky by producing wind.

As we encountered difficulties with projecting onto the whole of the walls of the cubicle in our prototype, it would be useful to experiment with projector placing. Due to the fact that the particular white material we used was also capable of being mapped onto from behind, it may be a good idea to place the projector at a distance further behind the cubicle if we have more space. Furthermore, owing to the limitations of Syphon with MadMapper, which caused difficulties in playing multiple videos, we would attempt find other means to link Processing with MadMapper. We would also, as previously mentioned, either construct our own chair or use a different type from the one we used in our prototype. This is because the chair had wheels and was capable of turning; depending on the placement of the light sensor and projector, this disrupts the viewing experience. It would also be preferable to position the light sensor a little more forward on the chair so that the user would not have to ensure they were covering the entirety of the seat. A whole other possibility, however, would be to use a pressure sensor.